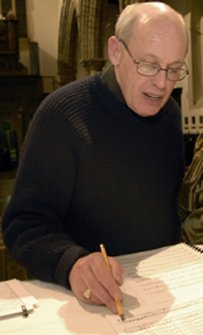 Studied at the Royal Scottish Academy of Music in Glasgow. He has worked as an orchestral double bass player in the UK, throughout Europe, South Africa and the Middle East, as a keyboard player, musical director, arranger and composer of music for the theatre and director of an arts centre. He composes and arranges music for choirs, the theatre and the concert hall, and has had premieres in Xiamen, China, and in Europe. He creates new instruments from everyday objects, and conducts choirs in County Durham, UK. He is married to the pianist Venera Bojkova

In the 1990s he took time out from music to do a PhD in political party development in Bulgaria and the Balkans, and to lecture in politics. He is currently writing an updated short history of Bulgaria.
You can read about this on the Bulgaria page and read a blog about political developments in the Balkans and elsewhere. He has been visiting to Bulgaria for many years, and lived there for a short while, and wrote a short guide to the country based on his travels around this beautiful country.